Writing a Novel on an iPad

- September 22, 2021
After 20 years of dithering I finally sat down and wrote a novel (The Heart of Lightspeed). The path I took involved some unusual technology decisions, which some people might find interesting so I put together this little blog post to talk about them.
First, I used an iPad Pro + Magic Keyboard Case. Not quite the traditional laptop computer experience, but it has come a long way since Steve Jobs revealed the first iPad. There’s a proper Files app now! You can drag and drop! Multi-app window support exists! (Although it was a pain to use until the recent operating system update.) 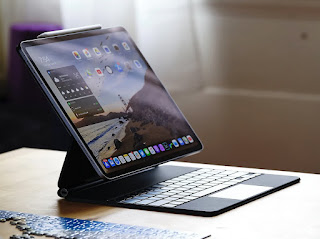 Press Photo
As keyboards go the Magic Keyboard is pretty darn good. It has backlighting. The keys have a nice click to them. The trackpad is a good size for what Apple has to design around. Getting used to Control / Option / CMD keys coming from the Windows PC world took some time, but it felt second nature quickly enough.
I wrote my novel using an app named Ulysses. Its a subscription fee vs a flat fee, which has its pros and cons. The main pro is that you get the security of knowing the app will be updated frequently because the developers have a clear interest in keeping users happy. For me personally, the subscription fee was another driving reason to keep working on my novel.
Combining the iPad’s “one app open at a time” user interface + Ulysses’ focus mode really helped me zone out distractions while writing. When all you have is white text on a black screen (you can customize colors) with nothing else its easy to get lost in the words. Though, I’d love for the ability to quickly disable all spell/grammar checks during a writing session. For those times I just wanna type without red underlines jumping out at me. 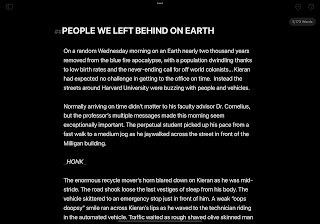 Focused Writing Mode
Ulysses uses an easy to understand branching folder system that makes organizing chapters, notes, and drafts a breeze. I love that you can customize the icon shape and color for a folder. That same ease of use doesn’t always translate into finding the right menu. Some things can only be done from some menus. Its not the end of the world, but it can be a bit frustrating. 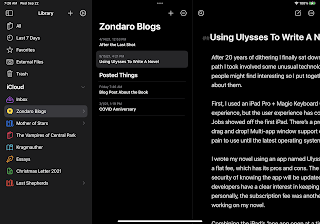 Organizing Structure
The ease at which you can organize things stands opposite to how clunky doing basic WYSIWYG (What You See Is What You Get) editing of text. Want to center text? Nope. Bold text? That’s in the app, but its not the same as bolding text in any other writing application. Ditto for italics. Ulysses is built around Markup, which is a type of code for writing that will appear on the internet. The code is read by various web browsers and other tools consistently, which isn’t always true of how WYSIWYG word doc editing. This makes Ulysses great for writing blog posts and other code projects, but a little clunky for writing a novel. 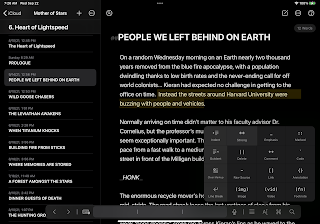 Text Formatting Options
The code-first nature of Ulysses does have it’s advantages though. It makes a great and easy way to insert notes, comments and follow up tasks inside of the text I was writing. These color coded items don’t count towards the final word count which is nice, and depending on your export settings they don’t print either. I loved using them. 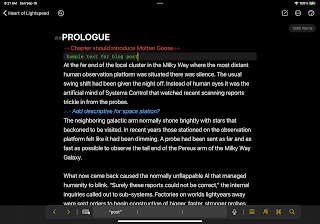 Code Color Comments
The same fiddling required to make basic font manipulations carries over to exporting your work. You type in a basic text editor, and then you can export into a snazzy looking final document in a multitude of pre-made styles. You can download new preset styling formats from the web, but you can’t customize how the export looks without using the desktop version of Ulysses. Even then its done in a coding type setup. Want to make it so chapter titles are centered and a different font? Good luck hand coding that, or maybe you’ll get lucky and one of the presets will work. 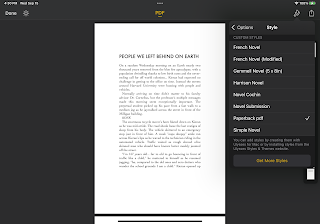 Exporting - Format Selection
Where the final draft exporting process feels janky... the act of saving my work was painless. The app saves your work as you go, and then synchronizes it across multiple devices. I wouldn’t recommend writing a novel on an iPhone, but it was wonderful for jotting down a quick note or making an edit and then having those edits there when I sat back down in front of my iPad.
The phone version of Ulysses was also a great way to check in on my word count/progress. Being able to set goals, and then track how I was fairing on them was great! It helped at a few points to know that if nothing else I was making progress on my word count goals... even when I wasn’t feeling too inspired by the chapter I was writing.
Once done with a chapter I put the editing tools to the test. The grammar tool is pretty nifty. Spellcheck however would sometimes just whiff on a word. Not sure what that was about. The app would not show a word as misspelled, but then it would be flagged when I did my final edits in Pages. 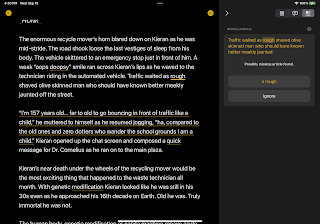 Grammar/Spelling Tools
I would not recommend using the Apple Pencil + the iPad’s touch screen to go through and do edits to your work. It’s too easy to miss the item you’re trying to circle, or to draw too big of a circle, etc. Also holding the iPad and a Pencil gets tiring quicker than you’d expect.
I’m still planning on using Ulysses to write my next novel even though it has more of a blog post/web coding focus. I think if I had a magic wand, besides centered text, I’d add some storytelling specific tools like: character sheets (being able to type @CharacterName and have it pop up a reference sheet on the side would great), cross referencing for locations and named items (ie click on “Portland” to see all the places that it appears in the book),  and finally I’d love some version tracking tools to more easily see edits to a chapter over time.
Overall for focused writing on iDevices (iPad/iPhone/Mac) I would highly recommend Ulysses!

Me on the Web